Going backwards is sometimes the only way to move forwards.

The 2nd District Court of Appeals today remanded Steven Avery’s Motion to Supplement the Record back to the trial court in Manitowoc. The decision—which will likely delay the filing of Avery’s brief according to Avery’s docket—has put to an end uncertainty over whether evidence submitted by Avery’s attorney, Kathleen Zellner on May 15th would  be granted. With this decision, those hoping for a filing within the next 4 days will have to wait a bit longer.

In a decision that appears to have highlighted the state’s failure to disclose potentially exculpatory evidence in favour of Zellner’s client, the COA decision—whilst delaying Avery’s brief—has allowed further evidence to be submitted relating to Brady violations. 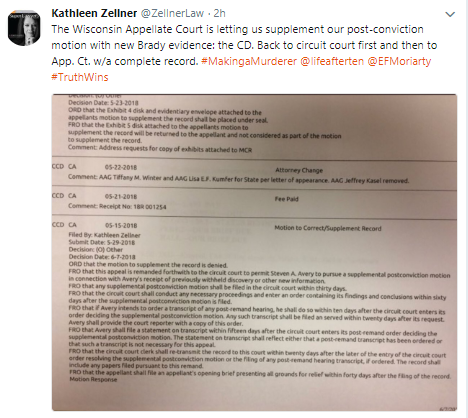 Opinion: Attempting to predict what will occur in the case of Steven Avery continues to prove to be an exercise in futility.

The idea that evidence should not be allowed to be considered because it was submitted after the trial courts decision to deny Avery’s motion for relief due to late disclosure—not just 6 months from November of 2017 to April of 2018, but close to 12 years, as it was not disclosed to Avery’s original attorneys—was clearly an absolute nonsense.

However, nonsense has levels.

The further idea that this evidence—that on the CD—had already been disclosed via documentation beggars belief. Some might call this shenanigans. I say it’s hugely disrespectful, and I’m delighted that the Court of Appeals has called the state of Wisconsin out on their disrespect.

What should not be lost in all of this toing and froing  is that the COA have already viewed the CD before the trial court will get the chance to. Think about that for a moment. Previously, my feelings were that the best way to gain some sense regarding the Avery case would be to get the hell out of Wisconsin. I might still be right, but I can’t help feeling that the state’s arrogance may have reached a level not to be condoned by anyone, not even its neighbours.

To try and make sense of the way in which Avery’s case has so far progressed I’ve felt the need to compare, and I can only compare his case with others I know, and while this certainly has limitations, I recognise both similarities and discrepancies with other cases I try to champion.

Melissa Calusinski—another of Zellner’s cases—is close to reaching a moment of clarity. By that I mean it’s been narrowed down—masterfully by Zellner, and I don’t say that lightly. In Calusinski’s case, the state now rests their hopes of prolonging an innocent woman’s incarceration, purely on the fact that her original attorney should have done a better job in defending her—by not accepting the state’s word that clear exculpatory evidence did not exist. The fact that Zellner—in the case of Calusinski, who confessed (falsely) to the murder of Benjamin Kingan—has worn down prosecutors to cling to such unethical reasons for attempting to keep someone imprisoned speaks volumes, and hints at what Avery’s future may hold.

The similarities between Avery’s and Calusinski’s cases are clear. The state in both cases wishes[d} to suppress certain evidence. Calusinski’s case has now reached that level. Expect Avery’s case to be at a similar juncture—though i’m not foolish enough to offer a time-frame—sometime in the future.

The discrepancies in Avery’s and Calusinski’s cases likely relate to perception. Avery was unliked. His family was unliked. Most importantly regarding Avery, the disliked man was just about to win against a far more powerful opposition—and that told. As for Calusinski, someone needed to be held accountable. Accountability meant everything in her case, no doubt in my mind.

In a case directly related to that of Avery, Brendan Dassey awaits a decision by the Supreme Court, due by the end of next week. The unfathomable decision by the 7th Circuit via en banc to overturn their original panel’s ruling that Dassey’s verdict should be vacated, highlighted by Judge Ilana Rovner’s—no coincidence her middle name is Diamond by the way—astute ruling that Dassey’s confession was coerced by that of ‘a thousand cuts,’ is reminiscent of the way in which Zellner works.

The accumulation of Zellner’s findings may not quite quench the thirst of those that seek a quick kill in terms of magicking up the individual[s] responsible for Teresa Halbach’s death. However, this is a process, one by which steps, rather than leaps must be taken. Those steps are not always seemingly forwards, yet progression is patently being made in a case that has to play by the rules that the ‘justice system’ writes.

I’ll leave you with this. The only reason Kathleen Zellner would take on a case such as Steven Avery’s is not purely to do with the fact that he is innocent.

The reason she took Avery’s case on is because she knows she can win and set him free.

If you have any questions or queries regarding this article, or indeed anything CJReform related please don’t hesitate to contact me here.

One thought on “One Step Back, Two Steps Forward For Steven Avery As Court Of Appeals Remands Motion To Supplement The Record Back To Trial Court”